← more from
HELLS HEADBANGERS Records & Distribution
Get fresh music recommendations delivered to your inbox every Friday.
We've updated our Terms of Use. You can review the changes here. 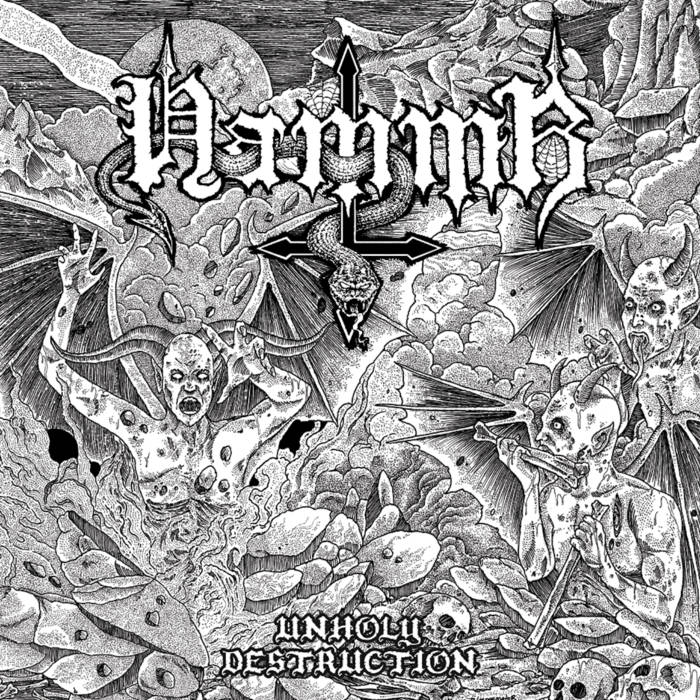 Derek it made me want to drink when I didn't feel like drinking, buy that shit up!

Dumb mmmn i'll take the unholy destruction of HAMMr over getting punched in the face, winning the lottery, or both. I'm pretty sure this is what sewage sounds like

tony white Bad ass raw old school or as I like to put it "now and always should be" school.Fuck production, it's all about the songs and atmosphere and this brings me back to the 80s.Get it or be lost in mediocrity Favorite track: Death Reign.

HAMMR was formed in Cleveland, Ohio by J. Hammer in 2013. As a strictly solo endeavor, HAMMR recorded a full digital-only demos album, which caught the attention of several labels. From there, the band went on to release the Hammr EP in 2015, first digitally and then on cassette tape through Hota Rex, the latter of which quickly sold out. Other plans for releases were delayed due to label managers going to jail as well as the usual financial delays, which led J. Hammer to start releasing demo singles directly to the metal people. It was during this time that he met the folks behind HELLS HEADBANGERS and also DEMONA founder Tanza Speed, who both took a lot of interest in HAMMR. Once he received the offer, J. Hammer decided to hold off on recordings for other labels, and use some of his demos and new material for the imminent debut album, "Unholy Destruction".

Ever aptly titled, "Unholy Destruction" is the grand culmination of the HAMMR aesthetic. Built on a proud foundation of early Bathory, Celtic Frost, Iron Angel, Discharge, early Slayer, Sodom, and Venom, HAMMR lets loose a wild 'n' loose blast of what J. Hammer has dubbed "Satanic speed," which, in his own words, "combines fast speed metal riffing with D-beat drums and relentless arrangements. This isn’t a quick-startup, Lemmy-worshiping metal/punk band that we see a lot of; HAMMR goes for your throat and doesn’t give a fuck about that shit." Indeed it does go for the throat - relentlessly and rabidly, possessing the listener's very body and soul as each galloping charge detonates upon pressing "play." The solos fly fast and free from MIDNIGHT's Commandor Vanik, instilling that very lawlessness so often missing from heavy metal these days. It's raw and rivetheaded to the very end, locating that elusive point between heavy metal glory and hardcore punk fury, and reveling in the moment while simultaneously clutching tightly to rock-solid songwriting. And, above all, it compels - nay, DEMANDS - repeat plays, so total is that possession.

Bandcamp Daily  your guide to the world of Bandcamp